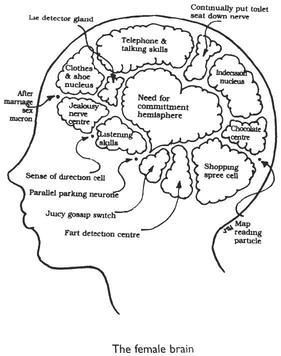 A long, long time ago Nita had tagged me and asked me to share my views on Feminism. The explanation she gave for tagging me was, “…since you like women so much…”

I thought about it for a long time, and finally assembled all that I had to say on the topic. So, here goes.

I need to make a few things perfectly clear to all my readers – I am not any of the following:

Okay, now that the necessary evil’s out of the way, I can safely recall an incident that happened a few years ago. I was debating in a college fest and it was an impromptu event. I walked up on the stage and picked up a chit. To my horror, the topic was: “Men are the blueprints and women are the masterpiece.”

One of the most glaring aspects of the male-female divide is the delusions of grandeur that men seem to have picked up somewhere along the line of evolution. This reminds me of an article I’d written called The Inner Workings Of The Female Brain:

“… the present day situation demands more caution on the part of the male. The female brain has quickly analyzed the greatest weakness that the Y-chromosome accords to us. It is that, while the man has to spend his time, money and efforts to woo the girl, she on the other hand just has to smile, and the guy’s hers! […] If Sigmund Freud were alive today, he would have called the male populace of the planet as a “sad bunch of toilet-tissue-emulators!”  Though we must be ashamed of ourselves, not to mention cautious, we’re neither, and end up being the receiving end of nitrogenous treatments meted out to us by the female.

More than everything, the female brain has evolved so quickly, that when we were still trying to make faces at ourselves by looking at our reflection in the river, the female was busy creating masks…”

So, men need to learn the basics right and learn to respect women. It’ll take us a long time to unlearn habits like raising an eyebrow when we see a woman driving a car and smiling when we see a woman traffic cop. It’s also about time we learn that women make better politicians and better bosses.

PS: Okay, maybe I am an asshole in certain situations where I don’t return phone calls, but that’s in self-defense – I usually find myself associated with a lot of psychotic girlfriends! 😀

31 thoughts on “The Feminist In Me”