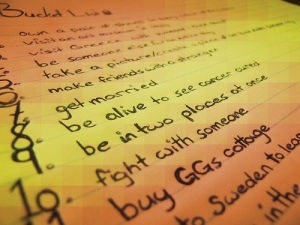 No, this isn’t just any other bucket list. This one’s unique.

There are quite a few bucket lists floating around in the blogosphere (By the way, is the word ‘blogosphere’ extinct?). I’ve seen and read them all, and most of them follow a predictable formula – go traveling somewhere, see some sights, taste some foods, etc. That’s all fine and dandy, and I wish them all the best in their endeavors. I have a few of those things to do as well, but I don’t think they would qualify for my bucket list. For example, I’d love to see a sunset over the Grand Canyon someday and I would give a hand and a foot to see the insides of a Pyramid. But these are things that I can and will do over the next few years. What I would ideally put in my bucket list are unconventional things that one would not normally find in conventional bucket lists.

One fine day, I’m going to buy a house in Gokarna and settle down there. What would make life more interesting at that point of time is owning a nice big tavern on the ground floor.

One day at a time.

PS: I used the full screen distraction free feature of worpress to write this. A neat idea, Jane. Thanks!

12 thoughts on “Things To Do Before I Die”